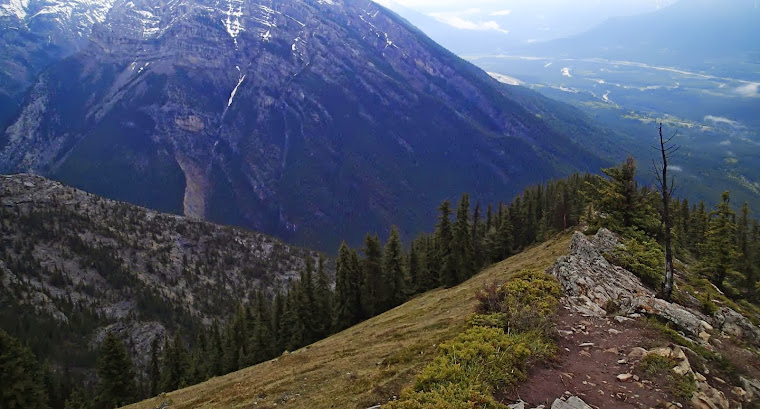 It's hard to think that up until last winter, my idea of a great day ski touring was lugging a set of Marker Dukes up for a lap or two at Black Prince or Tryst Lake (not that that isn't fun too). I've come to realize this winter that with light gear, legs of steel, and strong lungs, you can accomplish a lot in a day. After reading Mel and Ian's trip report of their Wapta speed traverse in 7:35 from 2012, it looked like the perfect blend between ultra running and skimo. I was stoked to give it a go!
I have spent the last couple of months religiously watching the weather forecasts for the Waputik Range, (so much so, that the only thing above mountain-forecast.com when I open my internet search bar is Facebook) there were a few promising days here and there, but every weekend, the clouds would roll in and dump a blanket of snow on the glaciers (Fresh snow is the worst right?). There was finally a promising weather window on Sunday, with minimal new snow, low winds and no clouds. This was going to be my last ski weekend for the next 3 weeks (and possibly the season), so I knew I had to give it a go. Texts were sent, Peter was in, and a couple days later I was packed and ready to go


When I rolled into Canmore on Saturday night, Peter had just got back from skiing moist fresh snow up high on Mt. Bell and isothermal garbage lower down. He was skeptical that Wapta would be as fast as I thought it would be. We spent an hour or two going over route descriptions and weather forecasts and finally decided to give it a go, and ski as fast as we could to Peyto hut. If conditions were too slow, we would bag Mt. Baker, Mt. Habel and Mt. Rhondda, then ski back to the car at Bow Summit. It travel was alright, we would give the full traverse a shot. We left Canmore at 4:00am, dropped a car off at the Great Divide Lodge, and were on the trail at Bow Summit by 6:00.
A solid freeze the night before left us with an awesome crust on the descent down to Peyto Lake. We hit the lake shore in just over 15 mins, and skated to the base of the moraines in 30. Peter led the way up to the toe of Peyto Glacier, cruising up the icy skintrack. When we got onto the glacier, there was 1-2cms of new snow on top of a very supportive crust and it was actually faster to ditch the old drifted in skintrack and make our own. We could see the peak of Mt. St. Nicholas on the horizon, and made a B line for it without even considering the Peyto Peaks plan.
The crust carried us 3/4 of the way to the St. Nicholas-Olive col, then deteriorated leaving us to break trail the rest of the way up. Both of us suffered a bit here, and were feeling a little worse for wear when we topped out. It's amazing how small you feel in such a vast expanse of glacier, and being able to see your objective in the distance makes it seem like a much bigger task. We made it to the col in just over 3 hours, the exact same as Mel and Ian had on their trip, so we knew we had a shot for a great time. This was a big boost to morale.
After stopping to fuel at the col, the descent down towards Balfor Hut was exactly what the legs needed. The ski down was perfect, with a couple cms of new snow on top of the crust - perfect for straight lining.

We stopped briefly at Balfor to refill water, make some boot adjustments and study the next part of the route. From the hut, we could see the remnants of a day old skin track, but it looked like it had been wiped out by a big serac fall, so we were wary of following it. In the end we used the first section of the old track to gain the bench, then made our own way towards the seracs. Once we got closer, we could see that the old track was actually well clear of the debris, so we jumped back in it and powered up the switchbacks to the Balfor col. The rest at the hut, set skin track and the awesome descent, had topped up the stoke levels, and we were feeling a lot better. It was great to be able to put the head down and not worry about navigation. We crested the col in 5 hours on the dot

As we approached the Scott Duncan hut, we could see 5 fresh tracks descending from the hut merging into a skin track that cut across the slopes below the hut heading towards Mt. Niles. We were stoked to know the rest of the way out was in the process of being paved by 5 people with heavy packs and fat skis. We ditched the rope here and kicked it into high gear knowing we were getting close.
Having finished the last climb of the day, we began the Schiesser-Lomas exit. Snow conditions were prime, with a few cms of corn on top of a great crust so we could ski fast without worrying too much about stability. I had checked the route on google earth ahead of time, and found a promising slide path to ski that cut some distance off the classic Schiesser-Lomas route and mostly avoided having to ski in the trees. I put the top of it in my Ambit 2 as a waypoint, and we navigated to it, then dropped in. It ended up being 300m of perfect corn that dropped us straight down to the creek. From there it was an all out skate to the end of Sherbrooke Lake. I had heard horror stories about slogging across the lake, but the conditions were perfect and we skated across the lake in 6 minutes. The rest of the descent is a bit of a blur, but we pinned it down the luge track skiing in true skimo race style - as close to out of control as possible.
We popped out in the parking lot stopping the clock in 6:34 chopping just over an hour off Mel and Ian's previous time. We must have looked like quite a pair, dressed in full spandex hooting and hollering on the side of the Trans Canada.

Overall it was a great day, and snow conditions were almost perfect. As always though, when you finish something big, you always see room for improvement. With the right group and more skintracks in I think it could go in under 6:00. When everything will line up for that though is anyones guess (the next week is looking pretty warm, with freezing levels over 3000m so I think 2014 is out of the question).

Just like lots of my runs in the summer, I love the idea of these big traverses, and traveling in the mountains in the winter with glacier and avalanch hazard adds an extra element of awareness and excitement. New possibilities open up when you realize that a 6-7 hour ski tour is not much in the grand scheme of things. I can't wait to get back out there and send something else big!

Data from the day: click here
Posted by Unknown at 17:03